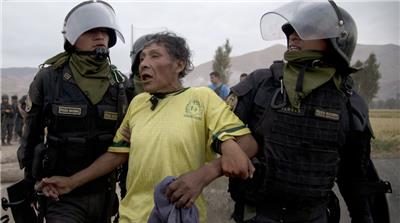 23 May Peru: Anti Mine Protests

Protests over copper mining project in Cocachacra have left a dozen people injured and spread to other parts of region.

Protests against a copper mining project in southern Peru have left a dozen people injured and spread to other parts of the region.

Demonstrators in Cocachacra, at the epicentre of the conflict, threw stones at police, who responded with tear gas.

Twelve people were reported injured, and authorities said protests had erupted in other cities, including the regional capital of Arequipa.

Farmers fear the project would contaminate their crops.

The owners say it would use desalinated water and pump water used in processing into the Pacific Ocean.

The protests, which began in March, have claimed the lives of two civilians and a police officer.

“A strike lasts 48 hours, it is not normal for it to last 53 days,” said the head of the police operation, Enrique Blanco.